A place to show off your latest screenshots and for people to comment on them. Only start a new thread here if you have some nice images to show off!
Post Reply
53 posts

Hello to the Ogre3D community!
I've been recently playing around with Ogre3D, and hence CEGUI, and I saw the lack of a nice bitmap font generator for use with CEGUI.

Specifically, This exports the three files needed to describe a bitmap font: .font, .imageset and .png . After trawling the CEGUI messageboards and wikis I managed to get kerning information into the font description, so fonts are rendered as accurately as normal OS fonts would be.

I see that CEGUI already renders out ttf files, so users will probably use Font Studio for the effects it can add to your fonts.
Though it can also handle small fonts just as accurately as ttf rendered fonts, Largeish image after the link.


EDIT (08/2010):
I've sorted out my hosting issues,
Font Studio is now back online at the link above.
Also, Version 4.2.1 now allows exports with more data for each character to allow much greater control over the positioning and rendering of the font.
Currently only the XML plugin has been updated to take advantage of this.

Woo, outlined text! This can be extremely useful for cases where you don't always know what background colour the text will be placed over, e.g. floating selection text.
Well done!

PPS. I decided not to export into Ogre3D's native fontdesc. files since they didnt seem to have support for kerning information. If there is enough demand for it, it could be added though.

I think a lot of people would like this. If your work resulted in .fontdef files, all GUI library could benefit from your tool. I know I'd use it, outlined text is pretty cool.
Creator of QuickGUI!
Top

there is one other bitmap font editor I know of but its a lot more basic than this one. Thanks for sharing

Glad to see you using it

That MyGUI implementation looks cool, but does it support kerning?

You see each character has two extra values (aside from the usual x,y,w,h), in CEGUI they are called XOffset (in the .imageset file) and HorzAdvance (in the .font file).

In fact, give me the layout of the font format for MyGUI and I'll try add an exporter for it. But I strongly suggest adding support for these two values. it's so easy to implement!
Top

Nitrogen wrote:In fact, give me the layout of the font format for MyGUI and I'll try add an exporter for it. But I strongly suggest adding support for these two values. it's so easy to implement!

Also look at my.name's code above.

I also found bug in your app: when show guides enabled result texture contain this guides.

look at capital U and Z

Yes, the guides are actually painted over the font! I'll fix that in the next version..

Okay with the MyGui font description, I see the coordinates for each character, but no kerning information... You cant do proper kerning with those 4 coordinates alone. You need those other two values I described...
Top

I forget exactly how I render glyphs in QuickGUI, but I think I use Ogre to get the UV coords of the glyph, and I use them to draw a quad to the render target. Basically I treat the font texture as a grid of character cells, and I display cells next to each other. I think I understand your explanation of the xOffset and HorzAdvanced, although I think that implementation would go into the Ogre::Font class, right? Kerning is used to produce the texture correctly, after the UV coords are determined, I can just use them. Or maybe Kerning is about overlapping characters, in which case I'd need to have the xOffset/HorzAdvanced in QuickGUI, so I can draw the characters correctly. But really it should be an addition to the Ogre::Font class, so that information is available to me by default. This wouldn't be difficult to add in to Ogre, would it? You probably wouldn't get any push back to add this into the core Ogre::Font class.
Creator of QuickGUI!
Top

Yes, Kerning is about overlapping the characters. You still need the UV coordinates to draw the correct characters, the other two values are just to position the characters correctly on the screen.

Because you are all using XML files, it'll be easy to add these two attributes to each character element.

It would be an extremely easy fix to load these additional attributes into the Ogre::Font class, then in the rendering code, instead of something like

A and C are the names used by windows internally for Xoffset and HorzAdvance respectively. Have a look at http://msdn.microsoft.com/en-us/library ... S.85).aspx for more information.

I'd do it, but I've never worked with CVS systems before, I wouldnt know how to check in/check out the files

I'm not the most familiar with the process either, but here is how you can get started:

Very useful thanks for sharing

Anyone has a copy of the program?
I didn't get around to grabbing it.

This does mean that current plugins made for Font Studio 4.1xx wont work in this version.

However, I’ve included the source code to all the plugins included with this version, and I can write a guide on how to upgrade any plugins that need upgrading if you like.

Jacmoe thanks a ton for sharing this, I revisited this thread and none of the links at the top worked.. thankfully you posted a download.

So I played around with this tool, not sure I understand what some of the UI fields are, for example "Trail" or "L" (is the TextBox covering the label?), but I was able to create some fonts with outlines, pretty cool.

There is one thing I'm wondering. If for example the UI supports multiple fonts in the same line, we need a variable to store the y component that letters sit on. I forgot the technical term, but its the imaginary line that all characters sit on, for example this should illustrate:

All of the j's are resting on the same line. I need this info exported into the raw data format. If this information was provide, I think I'd have all I need to be able to display these fonts, including support for mixing fonts.

By the way, I can't use the CEGUI or .fnt formats, but I think the raw data/graphic export is nice and simple. (although missing the vertical component I mentioned

Jacmoe, if you're in touch with Nitrogen can you share this post with him?
Creator of QuickGUI!
Top

Hmm, not sure whats going on with the display of the UI, it should look like this: 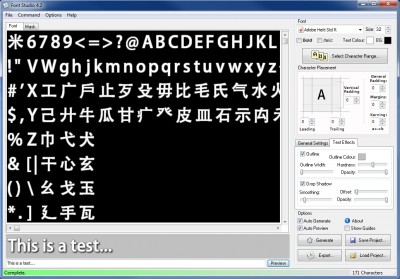 Leading and Trailing are the amount of pixels that pad either side of the character inside it's texture rectangle..

As for the vertical placement, thats a valid point.. I think that value would be something like 'baseline'? Anyways, I didnt even consider that when I was making it...
I'll look into it for the next version, which may be a while off since work is hectic!
Top

The Panel inside "Character Placement" grouping does not fit the Bounds in my version, it is always 4/5 the size of the "Character Placement" region. I'm not sure if this Panel affects the Up/Down Value boxes, but all of them are offset. Actually now that I think about it, I think its the text labels that are in the wrong places, not the Up/Down Value boxes.

Are you sharing the source for this tool? Its almost perfect, aside from the baseline value and minor UI defects.

Another reason why the baseline is important is due to centering the text. Take the screenshots in this other Ogre projec to illustrate:

In the second Label, it seems as though the text is vertically centered according to the full height of the text, from the top of the 'H', to the bottom of th 'p'. But wouldn't it look better if the text was centered according to the height of the text, from the baseline to the top? (I would post a picture but I'm at work) What do people expect, when it comes to vertically centering Text? (I believe I center text in QuickGUI from glyph top to glyph bottom, and people have commented that it looks incorrect, especially when you have a label with text where there are no underhanging parts, like 'j', 'p', 'y', 'q', etc. Just want to confirm if this is correct or not)

The good thing is that even if you don't officially support this, I can figure out the baseline for any generated font, modify the xml file, and then use it accordingly. But it would be cooler if I could write my own plugin, as my GUI lib doesn't have any built in xml parsers.. I'd have to add it just to be able to understand the default output of Font Studio.

any chance to get a working link to FontStudio420.zip? Ogitor's wiki doesn't work for me...
Top

Try now - I moved it to a directory which is part of the backup routine.

Hmm, thinking about those misaligned textboxes in Font Studio, it could be caused by running at a non-72dpi resolution...
Delphi has an "autoscale" option on which tries to reposition your controls on a non-72dpi resolution display and it causes all sorts of problems like this..
I'll have a look at it...
Top

It is really nice tool. However, it is not optimize arrangement on image & it is not export bmp with alpha BRAND NAME.
Bitmap Font Generator of www.AngelCode.com can export tga type and file fnt contains position of characters it is very easy to map it In Addition it has fontable. I am really eager to join Font Studio to improve its functions. Where can I check source to develop it ?
Top

Give Nitrogen a ping - I don't think he's interested in open sourcing it.
It's written in Delphi by the way.