by DarkScythe
hi, we are nearing completion of the demo but things get harder as we approach the finish.
we have some improvements on the visual side but still have tecnical issues to solve like the hickups that happen regularly.
we used a frame debugging tool(nvidia) to see what happens but it is not easy to catch the frame that peaks.
please let us know if there exists such a tool that can log the previous frames information.

here is another sample video:

. As far as the frame issues. It honestly looked to me as if it were either a random movement glitch, or some type of network prediction glitch. Maybe saving the frames can help you? Look in the Graphics Debugger section in NSight help

by DarkScythe
up, demo released, updated the first post.

by areay
Wow! Great job. No unit cap I see

the interface must be renewed or this is final version?

by DarkScythe
thanks guys.
there is no unit cap but currently you can not add more than 500 units per unit type which is a hardcoded limit, maybe we will dynamically grow unit pools.
the interface is done with mygui and it is not final, we will possibly use another solution in the future.

by simedj
What's the latest on this, it looks pretty cool?

by DarkScythe
thank you.
we actually paused development after releasing the demo but we started again in january.
we were only two programmers but now we have a game designer who also writes down a story and background.
unfortunately our 3d artist friend is a bit lazy these days(may be a burnout syndrome who knows) and we are looking for an extra hand for the graphics side.
anyway here is the latest done list:

-we tried to move to 2.0 but gave up and returned to 1.10. it was not stable at that time and donno if it is now.
-all files including map/replay files and the network messages are now using protobuf.
-we wrote a custom profiling tool which you can connect with a tcp socket and send profile data. it uses the qcustomplot addon and actually any application can connect and send data to be drawn.
-we have an improved new terrain system(my friend can give more details). check the terrain edit video below.
-we have improved the multithreading code, removed unncessary locks. some interpolation errors and hickups were fixed.
-we tried the hpa* algorithm but continued with the navmesh approach.
-we added support for jumping, sprinting, amphibious, underground units etc.
-we moved to a component approach so that just by changing lua scripts you can make a jumping, amphibious and transporter etc. tank.
-we had a dense grid based nearest neighbour algorithm. we are now using the boost r-tree structure and we made some logical optimizations.
-we improved the map editor, added support for skybox,skyplane,tile based map option,minimap,same materials with game etc.
-we had a hard unit count limit due to static entity pools. we now have a dynamic system and there is no limit on unit or entity count.
-we fixed some shadow artifacts, added bloom compositor, enabled gamma correction etc.
-we had only diffuse texturing for the units. we now have diffuse+normal map+specular+emissive maps. 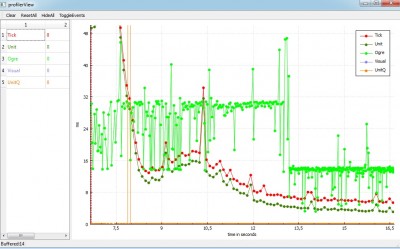 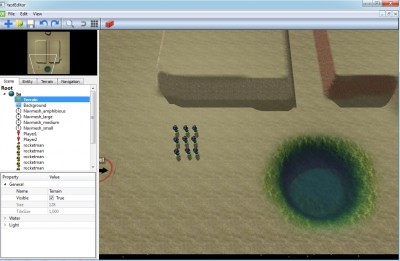 by N0vember
I love how your swarm of units move together, looks really organic. It would really fit an army similar to the zergs in Starcraft.
Congrats on the whole work. I've always been a fan of RTS with emphasis on the swarm, and I played a lot of Spring (Total Annihilation remake). Your engine looks like it could become a contender. Keep up the good work.

However I must warn you : in each of your videos, you have a pretty nasty sound artifact each time the sound of the video actually starts. It really hurts the ears. You should be careful with that.

i am aware of that sound glitch but it does not exist in the original video, it emerges when i upload to youtube, no idea why...

you thinked to the user can add their own unit if he has a model in .mesh? or a particular extension with their animations

(obviously with their statistic in an xml )

by DarkScythe
yes we aim to let anyone to define a new unit just by setting up from lua scripts.
there will possibly be limitations though. it is easy todo for simple units but gets more complicated for units with special abilities.

i saw this on
http://en.wikipedia.org/wiki/Total_Annihilation

multiplayer is in preview?:)

by DarkScythe
we first wanted to let users to do anything like a rts game engine but it does not seem suitable with our technical design decisions.
instead we aim to let the users customize through the editor, much more like the approach of blizzard games.

by spe02001
Very impressive prototype ^^
This should be a very power engine.
Not sure if the source-code released
All times are UTC+01:00
Page 2 of 2