A few years ago, I started to learn C++, and Ogre was my main motivation and my first contact with modern coding (not including my previous BASIC experiments on MSX and VG5000 when I was 7...).
This is why I'm really pleased to show you a glimpse of what we are working on right now : the SHMUP CREATOR. 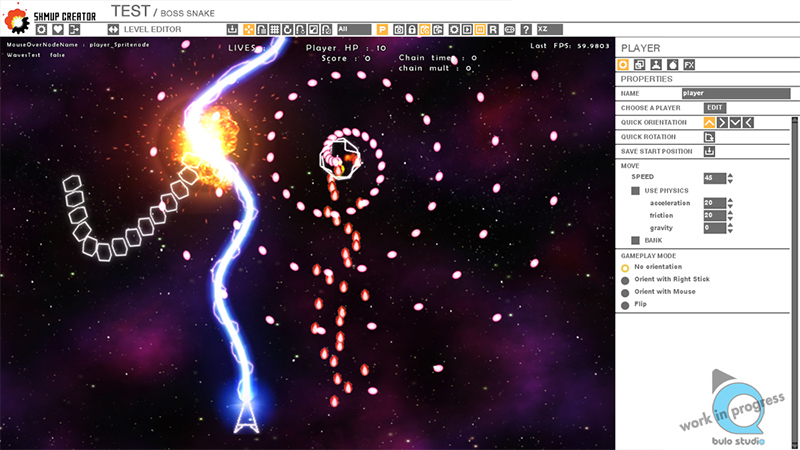 Shmup creator is a tool dedicated to the creation of Shoot 'em ups, without any coding.
We are trying hard to make an easy, but powerfull tool that anybody can use.

We will be alpha at the end of the summer, and we are planning to finish the game before the end of year.

I'll share more on the devlog very soon (and on Ogre forum) :
http://www.bulostudio.com

Thank you to the Ogre community for all the help !
S.

by NotCamelCase
UI really looks neat. I'd love to try that tool.

UI really looks neat. I'd love to try that tool.

Thanks NotCamelCase!
We are using MyGUI, and are very happy with it. The documentation is not great, but Altren is really a nice guy and is answering every questions quickly on the forum.

This week, after having fought with my homemade collisions routines for weeks, I finally implemented Bullet physics with the help of the really nice btOgre, and I wish, I wish I dit it earlier.... It was so simple and easy, and it works...
S. 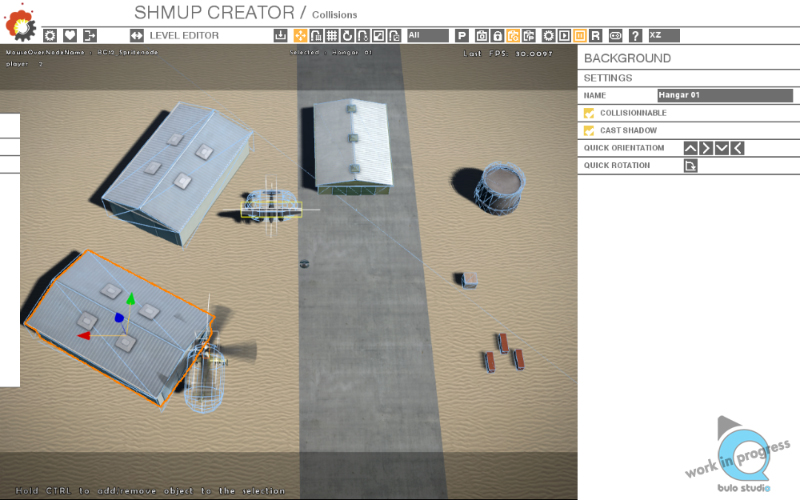 by suny2000
I wrote a post about the problems and solutions I encountered when I implemented splines in the tool. To be honest, most of the solutions are not mine, but I hope this post will be useful!
You can read it there:
Splines and shoot 'em up


And as an update, after posting this on reddit, Gtoknu posted a way to avoid arc reparameterization :
https://github.com/libgdx/libgdx/wiki/P ... 26-Splines 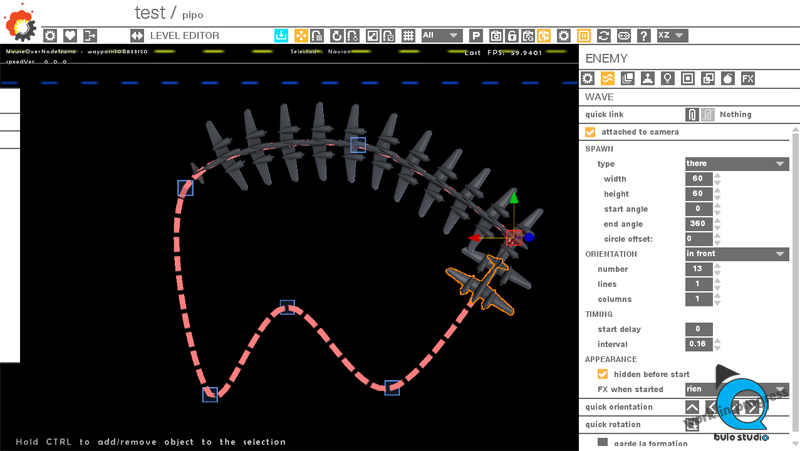 We have finished our contract jobs for a few weeks and have been working back on the SHMUP Creator:
. gizmos and manipulators are finished (not a very exciting task, but very useful)
. OpenAL has been replaced by FMOD
. A lot of debugging

And we are working on:
. gameplay (scoring systems, medals)
. debug (again...)

More about that very soon!
S.

by suny2000
We wrote a post about the work we did on the gizmos and manipulators for the SHMUP Creator:
level editing for shoot'em up

I have to say thank you to the Ogre community. If couldn't do it by myself! The great snippets and informations I found on this forum were priceless...
S.

New post about sound:
I finally choosed to use FMOD instead of openAl and OgreOggSound, and I explain why:
http://bulostudio.com/2015/02/06/sound- ... p-creator/

Keep on the good work!

We are working on a demo level, and on an ocean shader : 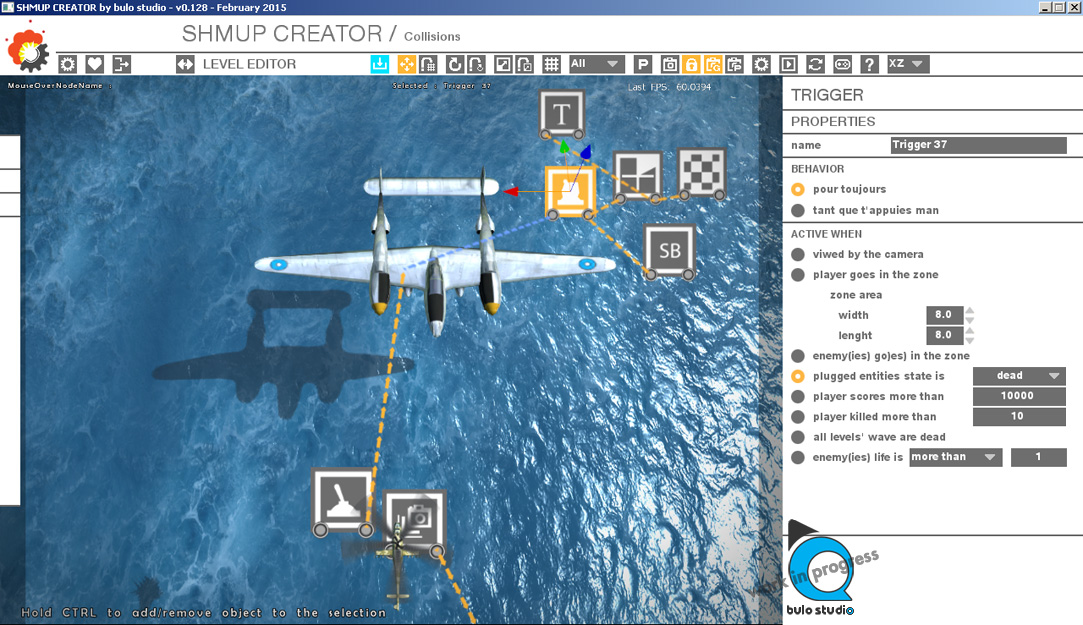 (As always, the GUI is in progress.)

by suny2000
I'm playing with Particle universe, and I'm quite happy with it.
Good looking explosions, at last!!!

A big one, for the evil bosses:

by AshMcConnell
That looks great!!

We are delighted to have been selected to participate at the STUNFEST!
The Stunfest is a great videogames festival, in Rennes, France. It will take place this week-end. … Conferences, indie games, superplay, concerts, E-sport, a lot of arcade games…

We are going to show the SHMUP Creator to everyone at the indie games floor. We worked on a nice demo to show what people can do with the tool, and I hope you'll enjoy it!

See you there, if you can!

Some new screenshot of the demo level in the editor: 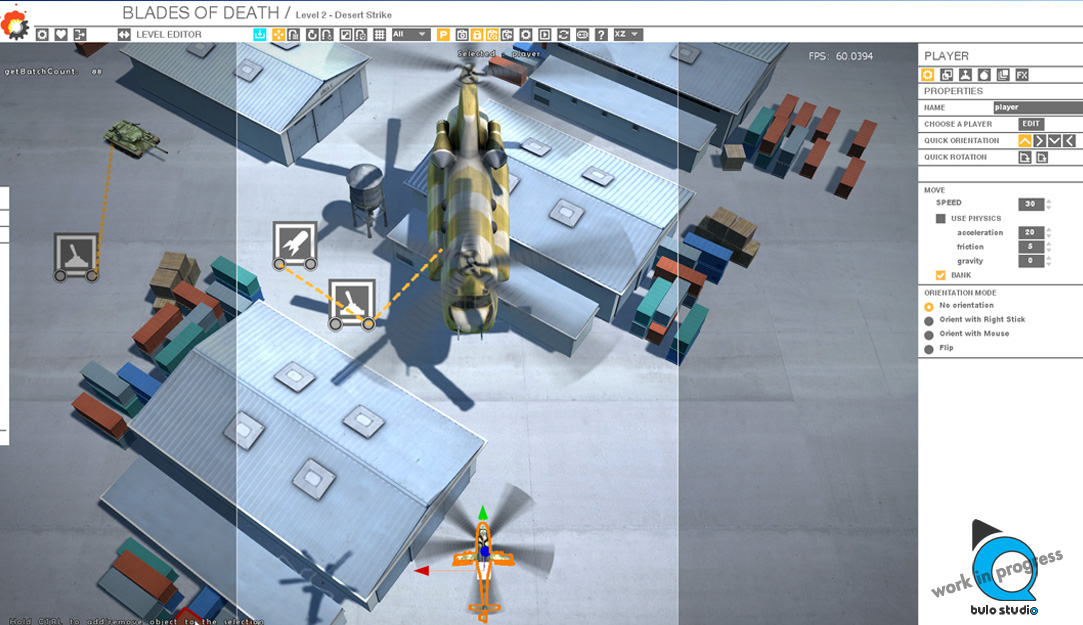 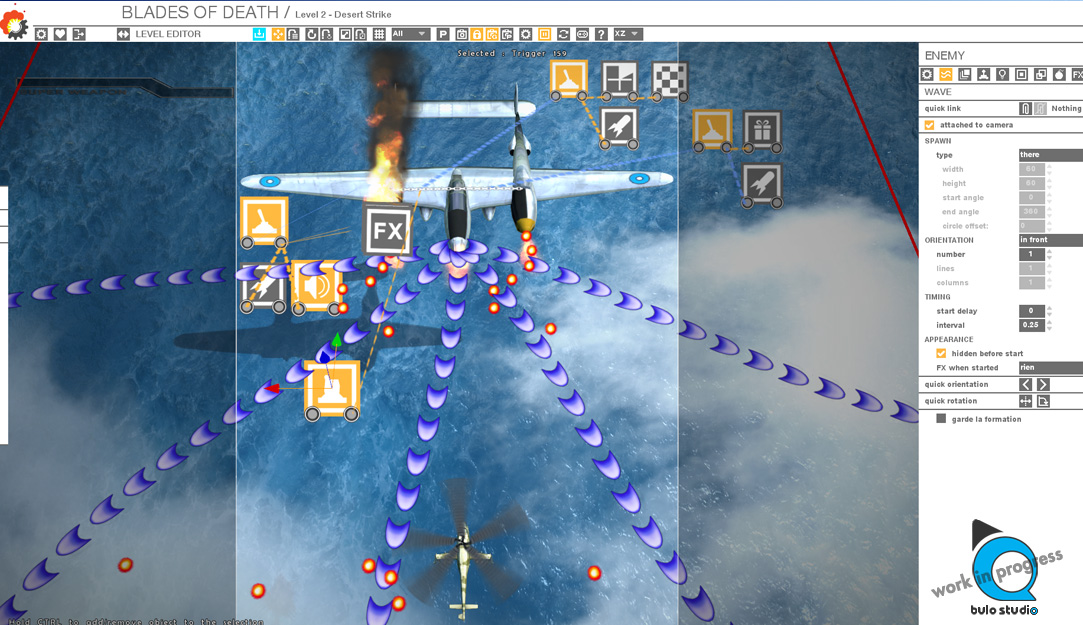 by suny2000
Hi,
some gifs to show the new 2D features: we can now snap sprites in the 3D editor. (the assets are not mine, by the way...)
The sprites are working in the 3D world, and so are in reality plane meshes.

This other gif show that the snap is using the sprites borders, and works well even if the sprites are rotated:

by suny2000
Hi everyone!
It's been a long time since my last update. I'm still working on the SHMUP Creator, but part-time, due to real-world constraints.
The good news is, it's now feature complete!

You can read the last update on the blog.
I'm now working on debugging, documentation, presets... The last few things which takes time to complete. But I'm close!


Some pictures of earlier updates:

by xrgo
This is one of the coolest Ogre projects around! keep it up!! ::clap-clap::

by AshMcConnell
Completely agree, this is an awesome project. All the best with it!

by suny
Hi everyone,
Long time no see!
Still working when I have time on the SHMUP Creator project.


I found the time to write some posts on the studio website:
http://bulostudio.com/en/

Some news from this project:
We started a private beta last June and the beta is going well. Beta testers are giving me a lot of feedback: bugs, missing features, a lot of ideas for later....

And some people are already doing great things with the SHMUP Creator, like Alec and his Nanoforce game:

I added a filter in the sprites shader to keep sharp pixels in a 3D world:

And a simple material editor for 3D objects: 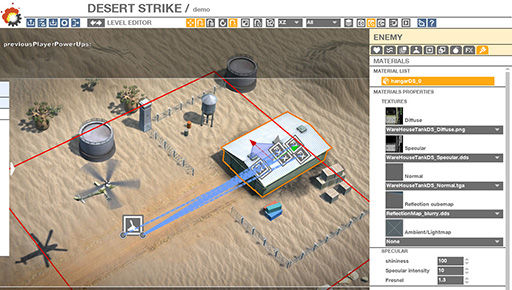 Our next goal is to make a trailer and post is there, as well as opening the Steam store page as soon as possible.
See you!
S.

by sercero
Congrats, it is very good.

Reminds me of R-Type.

by loath
this is such a cool project. i'm blown away. i love the snap tool, the insane number of bullets, the feel of the user interface.

by suny
Last month I decided to recreate patterns inspired by Touhou games (crazy Japanese shoot em ups).
It was interesting: sometimes it’s impossible to recreate them in the SHMUP Creator (Touhou is using a complex scripting system more akin to computer code), sometimes I found and corrected bugs but most of the time I was positively surprised by our Weapon Editor and what we can achieve with only a mouse moving some sliders.
With only a few settings and some smart uses of the Weapons and bullets features, I managed to create some complex patterns very close to the originals. 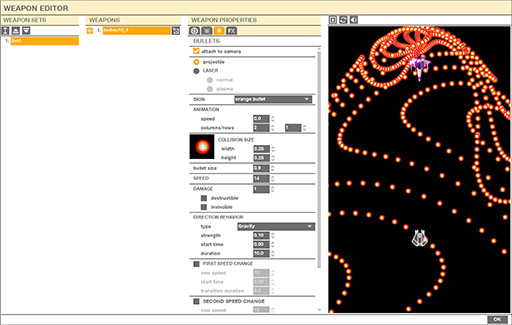 Here are some of them:

I'm still trying to fix an annoying bug: all the engine compositor render only black on AMD cards... I have no idea why....