Motivation
Many of todays game developers struggle with the creation of appropriate and good looking scenery. Creating static environments, that always look the same when you play through them can get dull and tedious over time.
Focusing on the design and creation of citys, this project aims to develop an application that allows the developer to have a city procedurally created to his specific demands and decisions, enabling him to create a scenery that changes at every playthrough and fits into his project.

Project Proposal
This porject focuses on the procedural creation of citys. Depending on the users input and decisions, the city layout and look will change and differ from previous and following versions. But not only the layout will be created. The city will also feature procedural created buildings that vary in size, height and looks, which can also be predefined by the user. For ambient looks the user will have the option to feature special areas in the city (eg. Parks, Rivers). Finally the city will be animated with Pedestrians walking along the sidewalks or inside the parks and cars driving around the streets. Details like street lamps and signs, traffic signals, trees, newsstands and cebra crossings will also be fill out the city. The frequency of those object can be changed by the user.
Because we are working in a group of 5 we have divided thes taks into several subtask:
My task will be to generate the layout of the city and procedurally determine where to place the zones and areas fort he buildings, special areas and the roads. The placement of streetmarkings and generating changing textures fort the streets, the sidewalks and any other subsoils will be part of this task as well. The scale of the city and the frequency of districts and what buildings belong in which district can be decided by the user. The user will also have the option to change the size of the streets ort he sidewalks and the frequency of important street markings and pedestrian crossings.
The road network will be represented by vertices and edges. The vertices will represent the crossroads and turns, while an edge connecting two vertices will be representing a street. In between thos streets the building zones will be set, differing in size and shape depending on the surrounding street layout.

The draft for the first class diagram is saved as an attachment after this post.
Schedule
31. March – 7. April 7. April – 14. April 14. April – 5. May 5. May – 2. June 2. June – 30. June 30. June – 4. August 4. August – 25. August Because we are creating a modern city with a Manhattan like structure there are many extension possibilities fort his project. Adding the possibility to change the timezone so that the layout and the look of the city adapt to the given time might be nice addition to the project. Also adding interiors would extend the scale and the uniqueness of the created scenery.

Why You're The Person For This Project
Bieng a student studying Information Technology and Mathematics I have gained a lot of experience in Programming. Especially in Java and C++. Additionally I am currently working for webauftritt.eu, a small organisation developing web pages and software. Working fort his organistion I mainly aquired skills in Java and obect-oriented programming. Because of my work and university experience I have aquired a lot of team experience and organisation skills regarding (software) development in teams.

I am also taking part in a 3D modelling and animation course with Blender. So I also have aquired some modelling skills and I know how to work with textures.
During the last semester I occupied myself with the game development process and started working with the flixel flash game development tool.
Because I just found Ogre I have not worked much with it. In the past days I looked throught the tutorials and started writing basic C++ Ogre programs.

Currently I am an active member at the Studentensport organisation in Vienna. It is a growing organisation of a team of students which regularly organises sporting events and tournaments. I am part of that team. I help out with the organisation and am responsible for the IT and web appearance.

Why OGRE?
Though I have not worked with Ogre for a long I am fund of the Ogre concept being an open source graphical engine, so that independant developers can easily create soffisticated and demdaning interactive 3D applications. I was keen working with Ogre because its easy to use and offer numerous features which allow more possiblities for the development of 3D applications.
In this project I will hardly be working with Ogre, but rather I will have to incorporate my project to work with the Ogre engine. Being part of my work I will have to patch the raods and sidewalks with textures which would require me to work with Ogre itself. 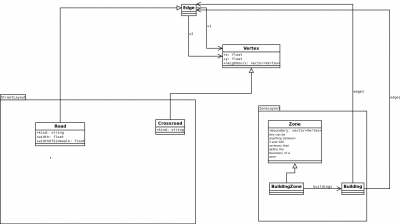