Discussion area about developing with Ogre2 branches (2.1, 2.2 and beyond)
Post Reply
130 posts

So I've been wondering for a while why performance was always half of the other APIs (it was very suspicious). I took a deep down in profiling today to find out we were stalling every frame!

I think I remember putting that there until we fixed more bugs.

Performance is now on par with the other APIs.
Twitter: @matiasgoldberg ● Follow my progress on 2.1 ● Alliance AirWar ● Tech Blog, Video games & Free Music at Yosoygames.com.ar

I don't. That 1GB was of system ram reported by Visual Studio's Diagnostic Tools. I just looked at the Process Memory graph.

I'm not sure if these are related, but I noticed in Windows (via taskmgr) I was consuming 2GB of VRAM in PbsMaterials which was completely off. I also noticed changing reducing mDefaultPoolSize[CPU_INACCESSIBLE] lowered the consumed memory exponentially.

I am not sure I understand what TextureFlags::MsaaExplicitResolve means.

From my (very limited) understanding of multisampling in Vulkan it seems that when multisampling is enabled the VulkanTextureGpu should also create a mMsaaFramebufferName image and imageview. So the colour and depth textures will also be mirrored with Msaa textures.

With these new textures the VulkanRenderPassDescriptor should then create new VkAttachmentDescription and VkAttachmentReference and the reference should be bound to subpass.pResolveAttachments.

Then in the pipeline multisampling.rasterizationSamples = msaaSamples; but this is already done.

What would the non explicit resolve scenario look like?

Let's forget about RenderWindows, because if you look at them, some implementations will confuse you.

Without Explicit Resolves: This is the case where you don't care about MSAA internals. You just want antialiasing and display to the screen.

With Explicit Resolves: For some reason (most likely postprocessing, HDR, etc), you need access to MSAA directly. And you know a bit or two of how MSAA works (or you just copy/paste our HDR+MSAA custom resolve shaders).
Or your texture is not Type2D (e.g. a cubemap, 3D, 2DArray, etc)

Enter RenderWindows:
Render Windows are a special breed because every API is different: I believe Vulkan is like UWP and Metal unless I'm mistaken. I didn't research too much into it.

I hope this clarifies everything 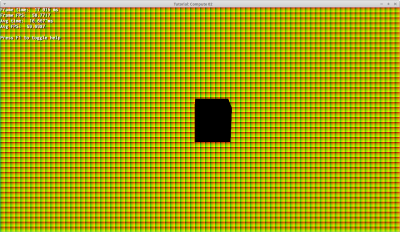 We're reaching end of the line now. I need to port the remaining shaders, fix the bugs that arise; and implement the details like MSAA, window config (which hopefully Hotshot5000 should be done by the time I'm done), resizing the window, detecting which extensions are unsupported, fixing the other RenderSystem with the barrier changes, etc.

Btw Hotshot5000, if MSAA is too much for you I can later take care of it; just leave the FSAA setting with dummy options. For me it should be easy.
Twitter: @matiasgoldberg ● Follow my progress on 2.1 ● Alliance AirWar ● Tech Blog, Video games & Free Music at Yosoygames.com.ar

Added Documentation with examples to RootLayout in case someone had no idea what was going on.
Twitter: @matiasgoldberg ● Follow my progress on 2.1 ● Alliance AirWar ● Tech Blog, Video games & Free Music at Yosoygames.com.ar

I've made a commit with what I have until now. MSAA still not working I get

I'll fix this issue around the beginning of the next week (hopefully by Tuesday) and after that I'll take a small vacation for a few days maybe one-two weeks. I'll still check this thread from time to time so if there are any questions leave them here and I'll answer them.

It's summertime here and I need a break. I haven't been out except to the corner shop in the last 3-4 months because of the Covid-19 situation. All I have been doing is just work at the job + work on my game + work on Ogre::Vulkan

It took me the whole day and I'm exhausted, but LocalCubemapsManualProbes is finally working! Error free! 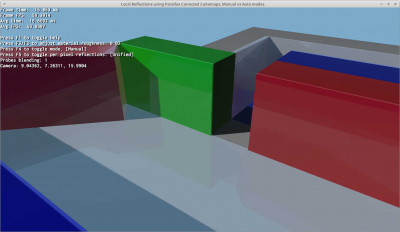 I need to fix a couple issues that I spotted that have little to do with Vulkan (Valgrind is reporting uninitialized memory reads in our HlmsPassPso caches).

After that I'll look into integrating your MSAA + window config changes before my code keeps diverging (I can already foresee some merge conflicts from today's changes...)
Twitter: @matiasgoldberg ● Follow my progress on 2.1 ● Alliance AirWar ● Tech Blog, Video games & Free Music at Yosoygames.com.ar

Small update from me here. The swapchain image looks like it contains the anti-aliased image but for some reason the screen flickers and I get:

I'll check with renderdoc tomorrow to see the transitions and where it goes wrong.
Top

OK I just tried your changes with FSAA, you'll never be able to fix it because CompositorPass::analyzeBarriers never considers the resolveTexture, and there is no ResourceLayout to signify Resolve destination

MSAA is working. Thanks for dealing with the details!

dark_sylinc wrote: ↑
Tue Aug 18, 2020 11:39 pm
OK I just tried your changes with FSAA, you'll never be able to fix it because CompositorPass::analyzeBarriers never considers the resolveTexture, and there is no ResourceLayout to signify Resolve destination

At least I know I was on the right path

. I realized the issue was because there was no barrier for the resolve texture and ended the day looking at analyzeBarriers() but I was to tired to figure things out.

I need to spend some time looking in the Compositor component to get more familiar with it. I know it was added in v2.1 I think but I never got the time to properly look into it. I'll take a bit of time off (a week, maybe two) and then I will learn more about Ogre.
Top

By now most samples are working in Vulkan. I didn't thought we would get this far so fast.

We have yet to port some Compute Shaders (e.g. Voxel Cone Tracing), fix the other RenderSystems (due to breaking changes from Vulkan), and fix window resizing.
Twitter: @matiasgoldberg ● Follow my progress on 2.1 ● Alliance AirWar ● Tech Blog, Video games & Free Music at Yosoygames.com.ar

I pushed a fix for that; but I didn't try compiling on Windows again yet; so I don't know if there are other bugs. Thanks for reporting.
Twitter: @matiasgoldberg ● Follow my progress on 2.1 ● Alliance AirWar ● Tech Blog, Video games & Free Music at Yosoygames.com.ar

We're getting closer and closer to trying Ogre on Android, and as we approach it I need to tell you something @Hotshot5000:

I noticed on that on Android almost all GPUs report only 65536 elements in maxTexelBufferElements.

This means TexBufferPacked maximum size can only be between 64kb (R8_UNORM) and 1MB (RGBA_FLOAT32). This is a stark contrast to PC where the minimum size is 128MB.

1MB is not enough for most of our advanced features (e.g. Forward+). In fact HlmsPbs by default reserves 4MB for world matrices (see setTextureBufferDefaultSize).
We could use your emulated TexBufferPacked which used a 2D texture behind the scenes that you wrote for GLES2 (and which was ported to GL3+ to get it working on macOS)

However there is a much better way. In Android SSBOs max range is at least 128MB. This is bizarre because SSBOs are considered a much more modern and advanced feature (but turns out it's just regular memory fetch with no format conversion, which is why it is supported more in Android); and in fact it's not avaible in OpenGL 3.x (needs 4.x).

Something I meant to do a long time ago is to replace most of our uses of TexBufferPacked with a new buffer: ReadOnlyBufferPacked, or RawReadBufferPacked (not sure on the name yet).

Btw I had forgotten about this: shaderc is not a different shader compiler from Google.

It takes glslang and integrates it with other stuff for SPIRV generation (like optimizers, validators); and wraps it into compatible interfaces (e.g. C interface instead of C++).
Therefore its HLSL support is the same as glslang's, because it IS glslang. It's not an alternative / competing implementation (unlike dxc from MS which is a different compiler supporting hlsl -> spirv)
Twitter: @matiasgoldberg ● Follow my progress on 2.1 ● Alliance AirWar ● Tech Blog, Video games & Free Music at Yosoygames.com.ar

It took me the entire weekend and some, but ReadOnlyBufferPacked is finally here!

Now Android readiness should be maximum. I need to fix a couple more issues on my end, top priority:
But there's no impediment to start an Android port.

The main question is how we want to approach it. There's a hundred ways to write a C++:
I'm actually more of a fan of mixing Java, because IMO it has less friction as the tooling is polished (unlike the C++ aspects). And managing the Java-side via pure NDK calls is really verbose.

It also becomes possible to load different .so depending on platform support (e.g. NEON vs non-NEON versions).

I also want to see if D3D11, GL and Metal are working as intended; because I want to merge into master around these weeks. It doesn't seem to make sense anymore to keep the Vulkan stuff in a separate branch.
Twitter: @matiasgoldberg ● Follow my progress on 2.1 ● Alliance AirWar ● Tech Blog, Video games & Free Music at Yosoygames.com.ar

dark_sylinc wrote: ↑
Tue Aug 25, 2020 4:11 am
Therefore its HLSL support is the same as glslang's, because it IS glslang. It's not an alternative / competing implementation (unlike dxc from MS which is a different compiler supporting hlsl -> spirv)

Yeah, I'm aware of this. So what I tried basically means it looks like glslang's HLSL is good enough for compiling our current HLMS shaders


dark_sylinc wrote: ↑
Tue Sep 01, 2020 3:00 am
I also want to see if D3D11, GL and Metal are working as intended; because I want to merge into master around these weeks. It doesn't seem to make sense anymore to keep the Vulkan stuff in a separate branch.

I can test D3D11/Vulkan in our project before merging v2-2-vulkan into master, if you want
Top

Thanks. First I'll run our unit testing suite which should catch any obvious regression on D3D11.

As for testing Vulkan in your project, targetting Vulkan sometimes needs some extra work so I doubt it will work out of the box.

That extra work is:

I fixed multiple problems in D3D11. It's working now.

However I won't be merging to master yet, because the unit tests caught minor differences which I have yet to research.

Slight differences in lighting in SOME of the PCC samples, and the Decals sample's lighting is different (as if one accounts for normal map while the other doesn't). I have yet to check whether these are regressions (or improvements) caused by the Vulkan branch, or if my baseline set is just too old.

On other news, I'm starting to port to Android!

Running a clear screen from Android via Vulkan for the first time ever.

Regarding the framerate: This is a full debug build with validations enabled.
It's also old HW (Adreno 505) at 1080p

Note to self: D32_SFLOAT is broken in older Adreno. Can't be used. Shadow maps are using PFG_D24_UNORM_S8_UINT instead.

It's a bit hacked together so I'll have to make the proper fixes later. It is getting late and I've been at this the whole weekend. I'm tired.
Twitter: @matiasgoldberg ● Follow my progress on 2.1 ● Alliance AirWar ● Tech Blog, Video games & Free Music at Yosoygames.com.ar