Anything and everything that's related to OGRE or the wider graphics field that doesn't fit into the other forums.
Post Reply
7 posts • Page 1 of 1

On the Ogre Class Reference several functions have no documentation.
This I want to improve and made suggestions in the papercut forum section.

I think for getYaw(), getPitch() and getRoll() it's important to know the co-domain of the returned values.
Especially the result of getYaw() can confuse people. (In the past I had problems, because of the lack of documentation. Today I read that also somebody else has problems related to getYaw().)

A half year ago I published the co-domains which I detected by a tiny test application.

User Kojack disagreed and said the co-domain of getYaw would be -180 to 180 degree.

Until today there is no consistency (of our both opinions) and thus there is not any documentation.
I want to fill this lack of documentation, but for this I need the state of the art.
I will be happy about every reply.

Proposed addition for the description of getYaw():

The co-domain of the returned value is from -90 to 90 degrees.

My personal background:
In maritime navigation it usual to use a 360° co-domain for Yaw. So I was confused because of wrong calculation values, until I recognized that getYaw() returns only a 180° co-domain.

I wrote a nested loop which creates a SceneNode and set its Orientation (quaternion) to several rotation states.
For each state it reads the yaw/pitch/roll values.
As results it shows the minimum and maximum values, that were returned by yaw/pitch/roll.
This is the investigated co-domain.

Source code of my test, witten in C#:

No case of my test loop returned a Yaw value below -90 or above 90 degree.

Or is there a mistake in my test loop?

Beauty wrote:I made some more experiments with my test loop.
So I found a nice example case:

Help to add information to the wiki. Also tiny edits will let it grow ...

I have to confirm that these are the values I am getting as well (my initial topic about the issue:http://www.ogre3d.org/addonforums/viewt ... 947#p81947). Can this be easily fixed in the source, to at least have the same system for each of the three rotations? Also, I support Beauty in updating the documentation.

EDIT: One more observation that might be helpful. With Yaw I often got back values for an angle stating Not a Number (mainly when overlapping the initial axis by 90 degree).
So i wrote my own method to find the inverse solution to a given matrix using Node.Orientation.XAxis, Node.Orientation.YAxis, Node.Orientation.ZAxis (according to page 33 of this book:http://books.google.com/books?hl=en&lr= ... &q&f=false). Now I checked my return values for pitch and roll as well, while it does not give the NaN "error", it returns exactly the same values as stated above. i.e.:

I am thinking that it might be because of the SQR nature of the yaw equation (2.21) of the attached picture.

EDIT2: LoL. I have just seen that beauty also made a topic about the NaN issue. Going to check it out. 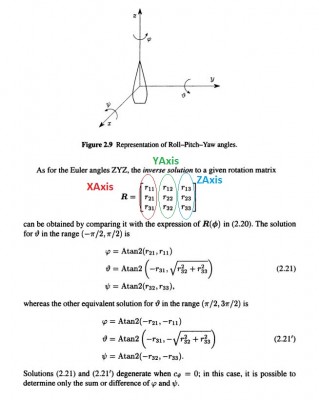 eddy wrote:I have just seen that beauty also made a topic about the NaN issue.

Yes, the solution is here.
Help to add information to the wiki. Also tiny edits will let it grow ... 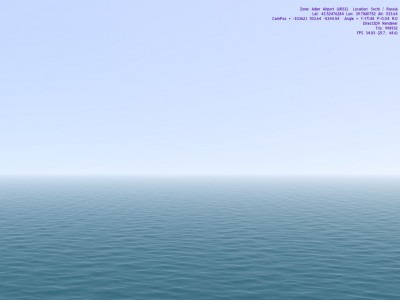 Very strange.
I have only one idea for this result.
Currently Mogre uses this code:

Kojack suggested in an other topic, it's better to use Ogre::Math::Asin() instead to avoid NaN problems.
Perhaps the Ogre arcus sinus also contains an other calculation related to the .NET one?
Help to add information to the wiki. Also tiny edits will let it grow ...

The reprojectAxis bool defaults to true.
This means that by default ogre is doing a different calculation than mogre, which is probably why I'm getting the full range while you are getting a smaller value. I'd probably get the 60,180,180 thing if I used the non default formula.

Mogre using System::Math::Asin is definitely the cause of the nans.
Asin can only accept numbers in the range -1 to 1. Anything outside that range is mathematically impossible and meaningless. Due to floating point error, the result of -2*(x*z-w*y) could end up being slightly off, such as 1.000001 or -1.000001. That is enough to make Asin (and Acos) fail. Ogre has protection against this, it checks the value before calling asin. Mogre should do this too if it isn't going to call the ogre version.

Edit: oops, just realised that I explained the nan thing roughly the same way in the other thread.
Top

Kojack, thank you very much.
By your help now we know the concrete reason of the problems and can fix Mogre.
Also we know the real co-domains and we can add it to the Ogre Class Reference.

Don't worry about the NaN in this topic.
It also related to our getYaw problems.
Help to add information to the wiki. Also tiny edits will let it grow ...

Add your country to your profile ... it's interesting to know from where of the world you are.
Top
Post Reply
7 posts • Page 1 of 1