A place to show off your latest screenshots and for people to comment on them. Only start a new thread here if you have some nice images to show off!
Post Reply
8 posts • Page 1 of 1

Hello folks! Many of you prob. know me from my past MMO Engines I have attempted to create. Well for the past several Months on and off I have been working on the SilverTech Game Engine.

Silver Tech is a general purpose Game Engine that includes:
Graphics (Ogre3D)
Physics (Bullet)
State Management
Audio (will include)
Networking (Internet Communications Engine)
Particles (Ogre's Particles or for those with a license Particle Universe)
Input (OIS)
GUI (will have CEGUI)
Time utility classes
Basic Debug Log
Will have some sort of AI

My first project that I am using Silver Tech for is a smaller scale Online FPS Engine. Max number of players in a match will be 32 to start with. Maps will be able to be added post launch and will be created using Ogitor. Both SilverTech and the FPS Engine will be open source projects. The Only screenshot I currently have is from the basic Login Screen which is a rewrite of the Player Demo login screen with a added password text field... 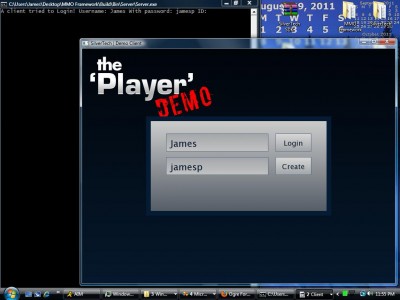 The Lobby system will be it's own generic system that could be used for any type of match based Online Game.

Lobby System Features:
Chat
Voice (Will be looking into the best way to add this)
Private Messages
Join/Create Match
- Want something else added let me know here

Got CEGUI Integrated now! Players and Developers will be able to easily create new GUIs and reskin existing ones all they want. The FPS Engine will contain a basic GUI for Server Lobby, Game Lobby, In Game, and Store/Inventory

Here is the new Login Screen: 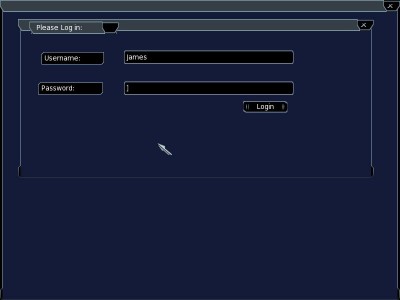 The SilverTech SDK is just about ready. This first release of the SDK will NOT include any documentation however it's fairly easy to figure out.

The SDK Will include:
Ogre3D Rendering Engine (Singleton so you can access your Scene Manager, root, window, ect from any part of your application!)
CEGUI GUI Manager
OSI Input Manager
ICE Networking
Debug Log
State Manager

Included Application Types:
Simple Application - This is a class that you can inherit from which will do all of the most important tasks for you in order to get a rendering window.

Most likely this won't be the most organized release but it will be enough to get people started.

NOTE: All dlls needed for the different components (Ogre3D, CEGUI, ICE, ect) will need to be obtained from their respective locations. The following SDK ONLY contains the dll for SilverTech.

So are you actually building a game with this, or is the idea that you could license the engine for other people to make games?

Also, do you have any pictures/video of the 3D graphics aspect of the engine?
check my blog - cybereality.com
Top

I am working on a Generic Opensource Lobby System to start with. I will then take that lobby system and use it in a basic Online FPS game sort of like Combat Arms. The FPS code will be completely Opensource while the Art assets are closed source.

For Graphics right now things are pretty basic however developers are free to create their own Shaders and use the full power of the Ogre3D Graphics Engine. SilverTech puts NO restrictions on what you can do graphically.
Follow me on Twitter - https://twitter.com/EmpireGames
Follow my Blog on Blogger - http://empiredevelopment.blogspot.com/
Top

James, you might want to take a look at the links in your signature... both are filled with spam.

Azgur wrote:There's also a distinct lack of source in this open source project

well to be fair:

James Proctor wrote:Both SilverTech and the FPS Engine will be open source projects

Which implies that he may not actually release any source code untill.. he's comfortable with it?

Nice to see you're back James, hope you have better luck this time round. Getting the source out sooner rather than later might be a good idea though - might encourage people to hop on board and lighten your load

<MetalPig> a world without undo-redo is a world I dont want to live in.
<JayRogers> wish reality had an undo function.. the redo function seems to be working fine though, i can screw up as many times as i want.
Top
Post Reply
8 posts • Page 1 of 1